The Rhythm of the Ages 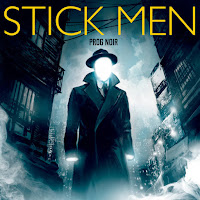 Prog Noir by Stick Men has ten tracks of virtuoso playing and lyrical sceneries painted with both the darker and brighter shades of humanity: there’s gloom and fun, just like in life. The musical palette is rich too. These guys know how to rock your socks off or make you listen in awe. On many songs you can count on it that you can’t count along.

Stick’s percussive touch gives an extra bottom punch to the rhythm track on most of the songs and when not, arpeggios and tappings hold the fort (a case in point is the instrumental piece “A Rose in the Sand/Requiem”). Pat Mastelotto (drums and percussion) and Tony Levin (Chapman stick and voice) chase each other around like rascals. Markus Reuter (Touch guitar and voice) adds textures, counterpoints and juicy solos with the instrument he designed himself.

It all sounds so effortless, though it surely isn’t. These guys are road and studio tested over and over again and you can hear it. It takes more than practise to achieve this level of stickmanship. Pardon my French.

The title track is a laid-back 4/4 with lyrics combining emotional and dystopian elements. It’s almost like a novelette laced with evocative poetic images, with some Tony Levin’s Road Diary photography included. Close your eyes while listening to it and you can see the scenes in black and white.

“Prog Noir” is an allegory of touring, a tale of hardships of the road. There’s quite a lot of loneliness and melancholy to it. You have time to think while travelling from town to town in a van. The affective ambivalence of modern nomadism is excellently captured in the lyrics.

As a place, Prog Noir seems to be rainy and forlorn. It’s where darker dreams are born, as the lyrics say. I think there are many Prog Noirs, most, if not all, inside of us. These places resemble landscapes of despair, but not entirely without hope.

The apocalyptic cover of the album gives you quite a few ideas about Prog Noir. The mysterious figure is made of light packed inside the dark, hard-boiled private detective apparel. A Space Age Philip Marlowe enlightened through and through, shining the inner light of nothingness. The sky is cloudy, anticipating tempestuous times.

The buildings look like they’re about to collapse on Mr. Marlowe, who defies the surroundings faceless, bodiless, standing tall and proud. There’s also smoke in the picture, or then again, it might be mist or smog. Anyway you slice it, things look pretty bleak.

However, the song is melodic and a freight train of beat, with a hooky chorus for good measure. It pounds away like the driving rain, a perfect, punchy opener for the album. Levin delivers his vocals with gusto. His stick has an airtight, full bottom, as usual.

A haunting track that makes you think while you’re stomping your feet and banging your head. Not an easy feat, but feasible, as long as you practise a lot. Play it again, Sam Spade.

“Mantra” follows, a charmingly twisted little tune. Reuter plays the wistful main melody line on his Touch guitar, while Levin and Mastelotto are having their share of fun. We may live in odd times indeed and oh how good these times sound. Though the tempo isn’t fast, amazing things are happening here. Children, don’t try this at home!

“Plutonium” is a bit risky business, since it’s basically a complex novelty song and novelty songs tend to wear out pretty fast. Never mind: the track includes truly wicked playing and that’s always enjoyable. Levin’s bass riff sticks like glue. The lyrics are funny, but with the said problem. Reuter’s deadpan recital is great, though. There’s a tragic side to the story – after all, among other things, the song’s about plutonium.

“The Tempest”, another laid-back straight rocker with Levin’s signature bass groove and fine lyrics, is about connections on a deeper, instinctual level. Despite the title, I don’t detect Prospero or any other sorcerer lurking behind the scenes.

Not many songs have “ipso facto” in them, but this surely has. The lyrics are also full of references to our inner workings, the mystical flow within each of us: “The rhythm of the ages.” It’s singing in our blood. Eo ipso, this track pleases the reviewer quite a lot. We’ve come a long way to be here at this hour.

The dystopian element and sense of doom are strong here too. The interplay of our evolutionary past, present and future carries something menacing below its surface. Quo vadis, Homo sapiens?

The song hints at hidden things we could and maybe should realise, but it will be possible only after a new beginning: back to square one, somewhat wiser than before. Yet another connection, a true connection, the real thing, “something tribal in our bones”, perhaps. Would it be the calm after a storm? Or just another phase in our journey towards the unknown? I see glimpses of hope amidst the tempestuous tapestry.

“Schattenhaft” means shadowy or shady. It’s a playful tune with a quirky backing track, mostly due to Levin sticking it out from the bottom of his heart, keeping himself very busy, no holds barred. Reuter takes care of the leitmotif while Mastelotto handles the rest. There’s also a closing section in the 70s progressive riffing style, where Mastelotto and Levin frolic all over the beats.

Another instrumental track, “A Rose in the Sand/Requiem”, doesn’t feature any acoustic drums, but Levin and Reuter’s arpeggios and some electronic, soundscape-like percussion handle the rhythmic part quite efficiently. The melody lines are beautiful and serene par excellence. The thunder-like kettledrum sounds on “Requiem”, derived, I believe, from Mastelotto’s pad, fit the title perfectly. The mood is sublime and peaceful.

There’s a strong Renaissance feel to “Leonardo” that would make Mona Lisa smile. You can hear the guys are having fun playing this intricately structured song. Especially Mastelotto bangs away with abandon and yet manages to keep the vessel watertight. So the abandon is precise, just like everything else.

There’s a tranquil part near the end, so everyone can take a breath until the Renaissance strikes back, with a vengeance.

I’m aware there’s another Leonardo around, close to the band, but in this review I’ll stick to l’uomo universale.

In both “Trey’s Continuum” and “Embracing the Sun” the players are weaving complex, overlapping patterns à la King Crimson.

“Trey’s Continuum” features different parts or themes smoothly evolving into each other and high-octane precision playing. Especially the second, heavier part is magnificent. The piece showcases the versatility of the band.

On the latter piece, Mastelotto throws in a sturdy solar power beat with numerous extra tricks while Reuter and Levin tap along on top of each other. It’s really amazing they can hold this thing together and make it kick like a juggernaut.

These two are my favourites on the album, along with “The Tempest” and “Prog Noir.”

The closing track, “Never the Same”, is another Levin tour de force, with symphonic themes played by Reuter. I think the somewhat cryptic lyrics are about a long marriage and getting old together: Ever the same, never the same, so carpe diem and enjoy the ride. They might also be about playing in a band, that is, signing beyond all those dotted lines, being alone together. Levin’s stick reigns mighty on this track and his vocals are once again passionately delivered.

The overall production of the album is great too. The sounds are full, crispy and tight: high definition. The bottom truly kicks, the leads fuzz and buzz. Everything is clear and has crystal presence to it.

So, all in all, in the end, in essence, to sum it up, it’s about rhythm of the ages, deep in our blood. I can feel something tribal in my bones as we speak and am happy to stick with it.
Lähettänyt Jussi K. Niemelä klo 6.38 Ei kommentteja:

Jussi K. Niemelä
"He is laughing, with a touch of anger in his laughter, but no triumph, no malignity. It is the face of a man who is always fighting against something, but who fights in the open and is not frightened, the face of a man who is generously angry — in other words, of a nineteenth-century liberal, a free intelligence, a type hated with equal hatred by all the smelly little orthodoxies which are now contending for our souls."